Posted by Brian G Flores on January 09, 2023
Today #NewMusicMonday feature is "Really Really Light", the brand new single and video from Canadian-American übergroup The New Pornographers. This is the first single from the band's ninth studio album Continue as a Guest, out on March 31 from Merge Records. The song, both by itself and as part of the larger arc of the album, are the musings of a person reckoning with mortality and sliding comfortably into his or her prime and beyond. The New Pornographers have been around sufficiently long to have burst into our consciousness and exited and re-entered the cultural zeitgeist a couple of times now.
Over the course of five albums between 2000 and 2010, the Pornos established themselves as arguably Canada's greatest indie rock band, churning out release after release packed with densely layered harmonies and lush, complicated, and undeniably catchy melodies. After a four-year recording hiatus the band returned like a band possessed with Brill Bruisers, an album characterized by a more upbeat and electrified sound inspired by bands like Kraftwerk. Over the course of 3 albums and 5 years, this new look New Pornos band featured a freshly energized sound, increasingly cinematic videos worthy of study in film classes, and the slow fade-out of original band member and Destroyer frontman Dan Bejar.
This song serves as a bridge between past and present, a reworking of a tune co-written by Bejar and bandleader Carl Newman that didn't make it onto the finished Brill Bruisers. "Really Really Light" still features the electro-pop influences of their past 3 albums, overlaid by a propulsive, guitar-driven sound more illustrative of earlier entries in the Pornos oeuvre. It's a sound that wouldn't be unfamiliar to fans of indie rockers The Weakerthans or Built to Spill.
The video, directed by LA-based filmmaker Christian Cerezo, serves as a striking visual accompaniment to the song. It features an ice skater performing a routine against the backdrop of a warehouseat, seemingly unbothered by the mundane setting. "Continue as a Guest" feels like a philosophical meta-analogue to the campsite rule, which for the uninitiated recommends leaving a campsite in better condition than you found it (or, in Dan Savage's case, as applied to relationships). We're here for such a vanishingly brief time, and the enforced isolation of the pandemic gave many of us the pause we needed to reset expectations in our lives. It's OK to not be cool, to be a little out of the loop, and to decide to do what's best for yourself rather than what other expect of you.
Dear reader(s), you may have have been wondering where I went and why I decided to return now. The simple answer is that the song struck a chord for me. I've long been on the Pornos express, and it's my wholly unqualified contention that Carl Newman is North America's greatest living songwriter. Dan Bejar is back in the band, and it feels like we've come full circle. Am I going to resume regular blogging? I can't answer that question with certainty. The good news is that it's pretty frictionless to do so if I want to.
So watch the new video, pre-order the new album and their march if you're so inclined, catch a show on their upcoming tour, and find your dharma. 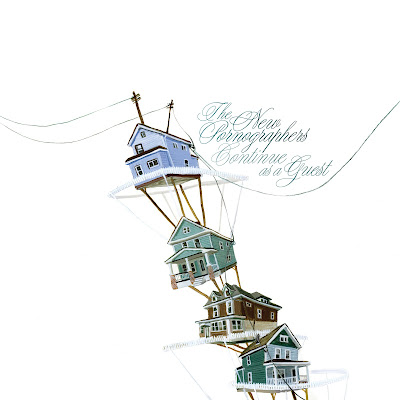