Posted by Amy Ruddle on August 04, 2016
Given that Kristin Kontrol (the solo project of Dum Dum Girls' Kristin Welchez) is opening for Garbage on their current tour at the specific request of the inimitable Shirley Manson, I walked into last night’s show at the Lincoln Theatre with high expectations. I am happy to say her impressively polished performance of sleek synth-pop songs did not disappoint, and left me eager for more.

Kristin’s dynamism was palpable. Her black leggings highlighted every nimble bounce and dance step, paired with arm movements that were fluid and sharp but not overly choreographed. She resembled a vogueing robot that would be the life of anyone’s dance party. One concertgoer up front was rocking out so enthusiastically he scored a fist-bump from Kristin at the end of the set.

As the title of her new album X-Communicate (available now via Sub Pop Records) suggests, many of its songs are about the struggle of trying to successfully understand and be understood by one’s romantic interest. Although quite personal, this subject matter is highly relatable, her delivery genuine. Her recounting of the amusing story of how her friendship with Manson was born further endeared her to the audience. In New York City, she accidentally stole a cab Manson had hailed, only embarrassedly realizing what she’d done as the taxi sped off.

While her performance of “X-Communicate” and “Going Through the Motions” displayed her vocal range, my favorite of the set was “Show Me”, the album's lead track. This song hadn’t struck a chord in me while listening at home, but Kristin’s upbeat performance combined with the song’s sexy synth horn ditty had me dancing in my seat. However, I enjoyed this show so much you can be sure I will be dispense with my inhibition and be one of many eager fans jumping at the head of the crowd the next time Kristin Kontrol graces the District with her presence. 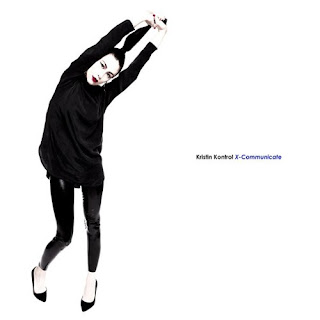