Posted by Amy Ruddle on June 21, 2016
The first music video featured this Tubesday is Kevin Morby’s “I Have Been to the Mountain”, a heavy song inspired by Eric Garner's death and dedicated to his memory. The song - and the spirit of the video's protagonist - pulses to life with a steady guitar strum and some sci-fi screeches. Paralleling the music’s evolution from dark to jubilant, the spirit gradually gains his footing in limbo land, growing sprightlier with every beat. For me, this song is a tale of rebirth through activism, a reminder to use the devastation around us as inspiration to demand change. Exploration of the dark and light sides of life is an overarching theme of Singing Saw (Dead Oceans, 2016), Morby’s first album since his departure from the folk group Woods. Catch him on June 23 playing at the Rock and Roll Hotel. 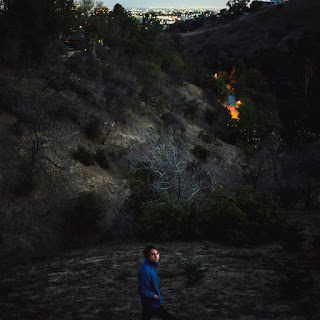 Next up is a Warpaint double-feature video for “Disco//Very” and “Keep It Healthy”. The simplicity of this video allows an unfiltered look into the musicians’ personalities,  and allows their voices to shine through. “Disco//Very” has a catchy speak-singing intro juxtaposed with unexpectedly subversive lyrics, making it my go-to for those times I need to recharge my badass battery. For added ferocity, look no further than Jenny Lee mouthing, “We’ll kill you, rip you up, and tear you in two” while sporting pink pigtails and a delighted grin. Moreover, the images of the skate park at dusk during "Keep It Healthy" seem a perfect match for lyrics exhorting the listener to remember his/her roots. Warpaint has said they are working on a new album and are slated to visit the 9:30 Club in October.

Finally, we have “Pretty Pimpin” by indie rock guru Kurt Vile, whose music I was woefully behind in discovering and appreciating. With run-on lyrics and elegantly simple guitar progressions that evoke comparisons to Pavement, I was hooked. The song’s repetitiveness also serves to reinforce its topic: the slow seduction of habit, the daily grind that can lead to bewilderment when you realize the disconnect between the self you envision yourself to be and the one staring back at you in the mirror. The video subtly adds to the confusion by introducing multiple versions of Vile appearing simultaneously, going about his routine but in slightly different outfits. Furthermore, dear reader, if there’s a strong sense of déjà vu striking you, perhaps it’s because the drummer is none other than Warpaint’s Stella Mozgawa. Did I mention Kevin Morby is lending backup vocals? Overall, this is one of my favorite videos this year, and I hope it brings you repeated enjoyment.