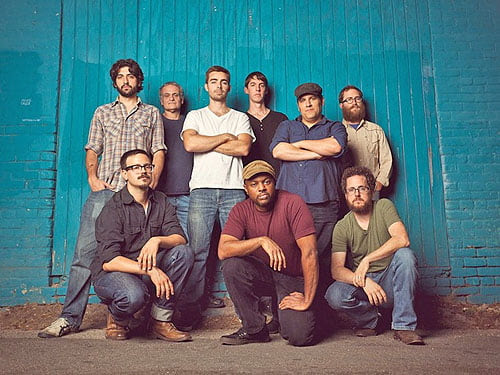 Hard Proof, the Austin-based Afro-funk ensemble, are preparing for the release of their cassingle 'Soul Thing' b/w 'Lake Tana' on Cassette Store Day (yes, it's a thing) on September 27 with their inaugural East Coast Tour. After stops in Atlanta and Asheville, Hard Proof will bring their Afro-soul train to DC for a Friday night show at Tropicalia.

Buoyed by a trio of veterans from the horn section of Black Joe Louis (and his Honeybears), this collective plays music inspired by the Afro-funk of Fela Kuti and the Ethio-jazz of Mulatu Astatke. Their sound should feel right at home to fans of the Thievery Corp and Fort Knox family of artists.

Why would a forward-looking band release a cassette single (aka a cassingle) in 2014? Drummer Stephen Bidwell explains:
Most of us grew up before file sharing or burnable CDs, so tapes were a huge part of our musical upbringing and discovery. Mixtapes sure had more of a personal touch than a Spotify playlist. Also putting it out as a cassingle reminds me of the golden age of hip hop when we consumed singles on tape and had to flip sides to hear more.

Catch them as part of the AfroFunk Festival at Tropicalia this Friday with Funk Ark and People's Champs. Doors open at 7pm, and tickets are $10 in advance or $13 day of the show. Until Saturday rolls around and you can pick up your own cassingle, check out B-side 'Lake Tana' (and don't worry, digital copies will also be available for the tape-impaired).