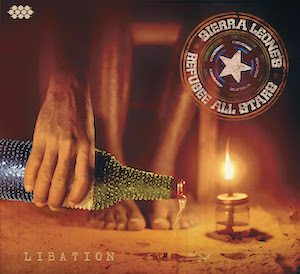 Sierra Leone's Refugee All Stars are celebrating their tenth anniversary with their fourth studio album, Libation, and a tour in support of its release. A more acoustic work than its two immediate predecessors, Libation features vintage instruments and hand percussion as a reminder of the band's humble roots. The All Stars recorded their first album, Living Like a Refugee, in Freetown in Sierra Leone and in refugee camps in Guinea utilizing donated and scavenged instruments and equipment. Libation features a seductive mélange of acoustics and musical influences, from gumbe and highlife to maringa and baskeda. That last style might sound familiar to American audiences, given its close relationship to reggae.

Despite the hardships the band has endured, Libation is a relentlessly joyous record. The title refers to the African custom of pouring alcohol on the ground as a spiritual offering or as a remembrance of the dead. The album honors band members and loved one lost in Sierra Leone's civil war, while celebrating the promise of a brighter future. Check out 'Gbaenyama' from Libation., below the break.


The All Stars are playing at Artisphere this Friday, with local Afropop band Elikeh opening. Doors open at 8pm, and tickets start at $25.