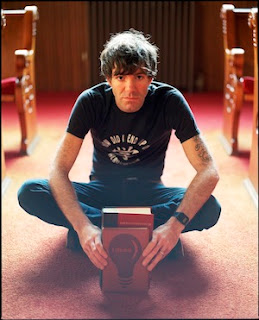 Frank Herbert said in an interview, "There is no real ending. It's just the place where you stop the story". Where the tale of Stephen Kellogg and the Sixers stops, the story of Stephen Kellogg the solo artist resumes. After an amicable decision by his longtime band to go on hiatus, Stephen entered the studio with one overarching theme - "What if I say exactly what I want to say?". With his first solo album since 2002's "Lucky 11", Stephen does exactly that on "Blunderstone Rookery".

The album, named after the childhood home of the eponymous hero of Charles Dickens' "David Copperfield", has a deeper, more intimate feel than the the last few SK6ERS albums. With überproducer Mike Mogis on the mixing boards, longtime collaborators including Kit Karlson and other members of the Sixers, as well as members of Sugarland, Nickel Creek, and OAR, "Blunderstone Rookery" enjoys a fine pedigree that permits Kellogg the opportunity to spread his wings. Gone are hand-clapping, swaggering rockers like 'Gravity' or '1993' from "Gift Horse", replaced by the introspection of 'Forgive You, Forgive Me' and 'Lost and Found'. The rousing spirit of 'Shady Esperanto and the Young Hearts' gives way to 'I Don't Want To Die on the Road'. The album is a little less John Mellencamp and a little more John Prine.

Coming to terms with parting ways with the band, with turning 35, as well as with saying goodbye to his grandmother and mother-in-law, Stephen channels all that energy into two of the album's most ambitious tracks, 'The Best' and 'Thanksgiving', the video for the latter following this piece. This is Stephen Kellogg at his most audacious and experimental, filling the spaces in between. 'Thanksgiving' is a sprawling, 10-minute epic of love, loss, and redemption, beautifully accompanied by a video of archival and public domain footage edited by Daniel Cummings.

In his bio, Stephen says he loved working on this album more than any other he's made, and that affection and attention to detail shines through on what is his strongest work to date. I'd suggest you join me on Monday at "Countdown to Blunderstone" at Jammin Java, but you're out of luck if you don't already have tickets as the show is sold out. Doors are at 6:30.