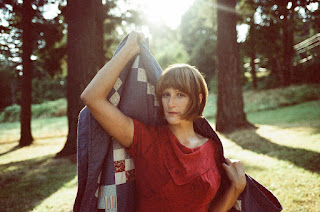 Portland native Laura Gibson has a new album, new label, and a surprisingly bold new sound. Retiring to the northeastern Oregon town of La Grande to write the follow-up to her well-regarded Beasts of Seasons, Gibson enlisted friends including Meric Long and Logan Kroeber from the Dodos, Calexico's Joey Burns, and Nate Query and Jenny Conlee from The Decemberists to flesh out a sound that NPR's Stephen Thompson has described as "harrowingly intimate". Although her sound may be "grander" on this album, her lyrics are still haunting and austere, and her voice quietly gorgeous.

Drawing inspiration from a town that she described as having a "certain gravity" and "curious energy", Gibson bestowed its name upon the album. She signed to Barsuk Records, prepared to release her new album, and embarked upon a European tour. Now back stateside, she graces the DC area with her presence Friday night for the first time in nearly 3 years with a set at Iota Club and Cafe. Doors are at 9pm, and tickets are $12.