Q&A with the Jamie McLean Band 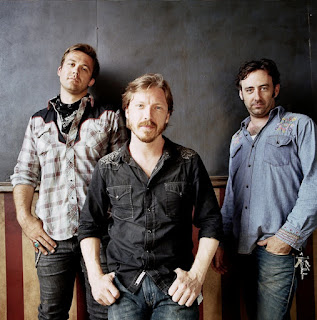 Music, like food, assimilates the flavors and textures of its surroundings. A Louisiana gumbo is a world dish, incorporating influences as diverse as a French base of flour and fat (a roux), the Choctaw spice filé, the African vegetable okra, and the Cajun/Creole "trinity" of onions, bell pepper and celery.

Gumbo also serves as an apt description of the music of the genre-defying Jamie McLean Band. If you're not familiar with the group, Jamie cut his teeth as the guitarist of the New Orleans' seminal Dirty Dozen Brass Band before  deciding to chart his own course in 2006. His band, which includes Brian Griffin on drums and Ben Mars on bass, embarked upon a relentless touring schedule with a Who's Who of Southern and roots rock acts, including Drive By Truckers, Gov't Mule, Gregg Allman, Blues Traveler, and the North Mississippi Allstars, to name a few. They also hit the festival circuit, wowing audiences with their incendiary live act at Bonnaroo, Japan's Fuji Rock, Mountain Jam, Gathering of the Vibes, Great Woods Music, and several others. Blending the blues, heartland rock, country and Southern swamp rock seamlessly, Jamie and his bandmates craft a sound that is simultaneously unmistakable yet impossible to pin down.

I recently had the pleasure of conducting an interview with the Jamie McLean Band. After releasing a trio of well-received albums over the last four years, the band decided to set a different tack. They're releasing four "Electric Postcard" EPs in 2011, with the uptempo Time of My Life and the bluesy Sunday Morning already available. They're kicking of a tour right here next week, playing four shows in the DC/Baltimore area over the next eight days. On Thursday, September 15, they'll open for Louisiana bluesman Tab Benoit at Rams Head Live. On Friday, they'll play a set at The Bullpen across from Washington National Park. Saturday will see them headlining a set at The Bayou, the New Orleans-inspired restaurant in Foggy Bottom. They'll close out the weekend in Baltimore at the Federal Hill Street Beat Festival. Here's the interview and a sneak peek at the song Cinderella, featuring Blues Traveler's John Popper, from the just-released Sunday Morning.

Jamie, you grew up in New York and gained fame as a member of a storied New Orleans band. How do you recognize the flavors of New York & New Orleans in your songs?
It was an honor to be a part of the New Orleans tradition. New Orleans and Dirty Dozen Brass Band have such a rich musical history and I definitely soaked up as much as I could. I'd like to think I have a lot more soul in my playing now. The grooves, vibe, funk, soul, blues of New Orleans is so deep and it definitely makes me a stronger player, singer and songwriter. Songs like Heads Are Gonna Roll and Hurricane are direct lyrical statements towards NOLA but more than anything its the feeling that I pulled from that funky musical gumbo. New York is an entirely different thing.  It can swallow you up if you're not careful.  NYC has pushed me to really step up my game in the songwriting department. There are so many great songwriters in varying styles. I pay more attention to lyrics here. The city is so big you feel like you need to write a song that can stop people in their tracks. Great songs plus great playing plus monster groove, soul and emotion is what I'm looking to put out.

I know picking a favorite show is like selecting a favorite child, but is there one gig that you have clearly identified as the one you love most? If so, why?
I honestly love it every time we get on stage. One recent show that we played in NYC was a "Time Of My Life" party at John Varvatos' store. Its the old CBGBs and the vibe in there is amazing. My parents came to the show and it was totally sold out. People were packed in like sardines and we came out blazing. I'll never forget seeing the look on my folks' faces when we got going. Literally they had there mouths wide open and couldn't believe the energy. That's what it's all about for me.

What are you reading right now? What are you listening to? And how does that influence you?
Keith Richards' "Life". Amazing read. The Stones are a big influence on me. I'll always love the dirty, roots, blues rock and its great to see how these songs just fell out of the sky. They worked hard and made an effort to write but more than anything it feels like they made themselves available to "receive" these tunes. Inspiring. As far as listening I'm loving the new Wood Brothers, Tedeschi Trucks Band, Chris Whitley, AC/DC, Bobby Blue Bland, Ray Charles.  The list is endless but I know everything I listen to influences my songwriting.

You've released 1 EP (Time of My Life) so far this year, have another (Sunday Morning) available for pre-order, and plan to release 2 more in 2011. That's a Ryan Adams-esque release schedule. Tell us about the EPs. Will each be self-contained, or will they form a larger musical arc?
I wanted to shake things up.  The idea of releasing an album every year and a half doesn't appeal to me anymore.  I'm constantly writing and I know the attention spans of everyone is shorter. I felt like if we could put out new music every few months that fans would be excited about it and the response has been great.  They each have a "theme" of sorts. Time Of My Life is the trio/rock record. Sunday Morning is blues based and features John Popper of Blues Traveler. We will release a live record and a cover songs record. I see this as being a larger musical arc. Hopefully this is our new model and we can continue to release music a few times a year. It really pushes us to create more and to experiment with different styles and players.

You've worked with and toured with some amazing musicians and producers, and played at some famed venues. Is there anyone you haven't worked with yet but still want to, and is there any venue you haven't played yet but would like to?
Stevie Wonder is always on the top of my list. As far as venues I'd love to play Red Rocks.

What do you want your DC-area audiences to come away with after seeing one of your gigs?
I want people to feel like they've just had a great night out. Its entertainment and I want people to get away and have a ball. Also, I hope they feel like they just saw a band in their prime. I feel like we are at the top of our game right now as far as performance. I hope they love the songs because I feel like we have been writing really great tunes lately. The response has been overwhelming to the new music and I can see it at the end of every night when I'm signing CDs . People are really gravitating to the new songs and I know we are putting on one hell of a stage show.

For the New Orleans fans out there - you can go to one Mardi Gras Parade. Which one do you attend, and do you stand on the sidewalk side or the neutral ground side?
I used to live on Magazine Street so the St Patricks Day parade always ran right in front of my place.  I had cabbage in my yard for days. As far as Mardi Gras I was almost always on tour with Dirty Dozen during that time. Everyone wants DDBB for their Mardi Gras parties. But....I would go to just about anything that marched down St Charles. I always tried for the neutral ground but if I was late I'd party on the sidewalks.  "Throw me something mister!"