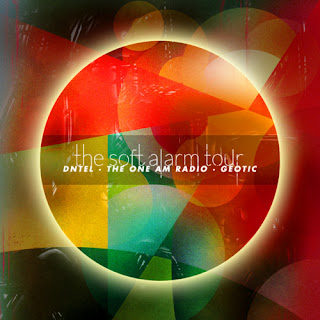 Jimmy Tamburello, also known as Dntel but probably best known as 1/2 of the Postal Service, brings his Soft Alarm Tour to The Red Palace on Friday night.  Known for a variety of sounds from his early glitch-oriented compositions to the more electroacoustic collaborations with Jenny Lewis (Rilo Kiley) and Ed Droste (Grizzly Bear) on his 2007 album Dumb Luck, Tamburello is one of those electronic artists, like Four Tet's Kieran Hebden, who defies expectations of what the electronic music genre should be.

Joining Dntel on this tour are The One AM Radio and Geotic. The One AM Radio, a project of Hrishikesh Hirway known for its lush arrangements and otherworldly sound, strikes me as the kind of music Sam Beam would have made had he gone electronic rather than acoustic. Geotic is an ambient, minimalist side project of Baths' Will Wiesenfeld.