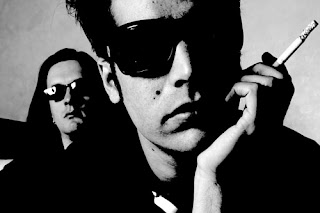 Plato wrote that music was the "movement of sound to reach the soul for the education of its virtue". Having not participated in the "prog rock" scene in nearly two decades, I had no expectation of what the band Blackfield had in store for me at the 9:30 Club last night. Despite having ventured nothing, I couldn't help but think that I gained something listening to a band that has built a steady and loyal following with little in the way of press coverage.

Blackfield is the collaboration behind Porcupine Tree frontman Steven Wilson and Israeli singer Aviv Geffen. The former is better known for producing albums consisting of long-form movements in odd time signatures; the latter for being a conscientious objector to mandatory service in the Israeli Defense Force and a witness to the assassination of the late Prime Minister Yitzhak Rabin. Together, they produce a sound that, by virtue of their collaboration, defies easy categorization.

Wilson comes across like a proletarian version of Pavement's Stephen Malkmus; Geffen a more energetic vocal analog to Placebo's Brian Molko. Their songs are tightly constructed pop nuggets, often tinged with melancholy, defiant in the face of daunting odds and societal expectations. Their sound veers toward hard rock, but then abruptly leaves the bombast behind and delves into the sublime. Their strongest numbers feature the densely layered harmonies of Wilson and Geffen with the support of bassist Seffy Efrati and keyboardist Eran Mitelman.

Plato also described music as a "moral law", one that gave "soul to the universe, wings to the mind, flight to the imagination". Wilson occupies a niche as a prolific if under-appreciated artist with a yeomanlike body of work, both solo and with the various groups to which he belongs. Geffen is an icon of the Israeli peace movement, his fame and his fate inextricably tied to an unwanted externality. Given all this, perhaps it isn't that strange of a notion that these two men, born of very different worlds, would have found a way to bend genres and make music somehow more than the simple sum of its parts.

Leah said…
Hi there! I am contacting you from the 9:30 Club - we love your review. We'd love to work with you for some upcoming shows - please email me at leah@930.com for some more info! Thanks!