Diane Schuur In Her Prime at Blues Alley 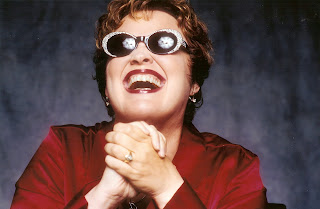 It had been ten years since Grammy-winning jazz vocalist Diane Schuur last played Blues Alley, and Saturday night marked her return to the historic Georgetown stage. The singer was in her prime as she delivered an artfully crafted set of classic jazz standards to a packed house who hung on her every ringing high note and emotive lyric.

The concert concluded a two-week November tour with dates in Bucharest, Romania, Catanzaro and Salerno, Italy and Syracuse, New York and finally Washington, D.C. None of the songs on the artist's 2008 album, “Some Other Time,” made it into her set. Instead, Schuur played a mix of songs that earned her international acclaim early in her career, such as her trademark “Deedles’ Blues,” recorded with the Count Basie Orchestra in 1987, punctuated by well-loved standards such as “Bewitched” and “Autumn in New York.”

The set began with a rousing rendition of “Deedles,” with Schuur’s lyric resonating in the crowd: “Deedles is my name… I don’t know how I got here / But I’m mighty glad I came.” Schuur belted out one of her quintessential, perfectly pitched high notes to end the tune. On a dime, she transitioned to a slow, lyrical version of McCoy Tyner’s “You Taught My Heart To Sing.” Schuur offered a melodic, almost meditative solo, a refreshing example of scat singing in a ballad setting where most would opt to stick to the lyric.

Perhaps the most exciting element of the show was the overwhelming sense that Schuur, now 56 years old, remains unapologetically and delightfully herself. Her matter-of-fact manner (“I guess we better do a ballad now”) and subtly self-deprecating humor (“I lost a few pounds—again”) made every audience member a fast friend. With her signature rhinestone-studded sunglasses glittering, the singer, who lost her sight at birth, invited the audience to sing Irving Berlin’s “Always” with her, saying, “It’s always better with your eyes closed.” Then, slyly, “I didn’t say what…”

Schuur took over for Porter on the last two songs of the set, accompanying herself on piano for “Bewitched” and “Louisiana Sunday Afternoon.” A few lines into the former, Schuur stopped abruptly, having forgotten the lyric. “Uh-oh,” she said. “I’ve got Jazzheimer’s disease.” The crowd laughed, Schuur found the lyric again, and the song carried on. Most didn’t catch the poignant undertones of the joke: her husband, Les Crocket, is currently suffering from Alzheimer’s disease.

After the show, I spoke with Schuur about growing older, her advice to young singers and her upcoming country album, which she will be recording this December on Vanguard. “It’s a drag,” said the singer of her husband’s condition. “But you know at the same time, it’s like digging for pearls in the oyster, you’ve got to look for the pearls within the sand.”

Said Schuur of the blunder, “Hey man, I forgot the lyric. I mean that was almost a train wreck in the middle of ‘Bewitched.’ But that’s what we do, that’s how we learn, that’s how we grow as artists. There is something to forgetting because we learn.”