Here We Go Magic at the Rock and Roll Hotel 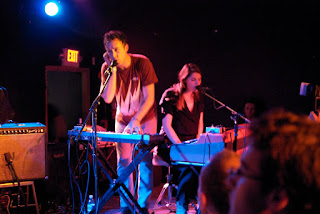 On Saturday night I ventured forth to H Street NE and the Rock & Roll Hotel to catch Here We Go Magic with April Smith & the Great Picture Show and Glass Ghost.  I missed about half of the Glass Ghost set, so I'm not going to say much about them, but my first impression was that they sounded like a more synthesized Doveman.

Despite a late start that was attributable to a problem with April Smith's acoustic guitar, she and her band The Great Picture Show were in fine form.  I think her new album, Songs for a Sinking Ship, will be a breakthrough for her.  Her rollicking brand of retro Western folk-rock, a Sylvie Lewis or Nellie McKay meets the Squirrel Nut Zippers, works.

One final word on April and her band.  While many up and coming artists don't put much thought into what they wear on stage, that is obviously not the case with this group.  April herself was festooned in a short red dress, appropriately large post-ironic belt buckle, and the most fantastic pair of red heels.  Her band rocked dress shirts, ties, vests, and the occasional hat although they made the wise move to leave any suit jackets backstage given how infernally warm it was in the R&R (a frequent problem there).  That kind of attention to detail really surprised me.

Finally, it was time for HWGM to take the stage.  I had seen them open for Grizzly Bear last year, and was generally pretty pleased by what I heard.  Their eponymous debut takes a decidedly lower-fi tack than their live show, sounding like a more electronic version of Yo La Tengo or Sonic Youth than their stripped-down Stars sound live, so I wasn't entirely sure what to expect from their headlining turn.  I came away very pleasantly surprised after hearing their set.  Although HWGM started out as a Luke Temple solo project fleshed out into a full-band record, the band built around Luke - guitarist Michael Bloch, drummer Peter Hale, bassist Jen Turner, and keyboardist Kristina Lieberson - have really gelled over the last year.  They were very good opening for Grizzly Bear last year, and now they're on the verge of being great.  Their shimmery take on an updated psychedelic folk sound washes over and around you.  At the same time, you never lose sight of the painstaking attention to detail in their songs, the texture that the twin guitars, keyboards, percussion, impart on the music.  I expect to hear big things about this band coming out of SXSW.