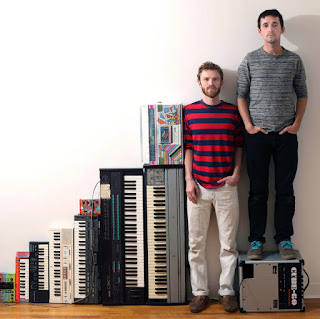 Today I had the pleasure of speaking with George Langford and Tom Van Buskirk, the Brooklyn-by-way-of-Rhode-Island electro-MacGyver duo known as Javelin.  If you're not familiar with them, their music sounds a bit MGMT-y juxtaposed over the sampling wizardry of Dan Deacon.  Their famously lo-fi live sound is accomplished via a custom-built stack of spraypainted boomboxes and an FM transmitter.

Their April 3 show at the 9:30 Club with Yeasayer is already sold out, but I'm sure you know where to find tickets if you're enterprising enough.

MetroMusicScene: Did you really play 16 shows in 4 days?  How was SXSW?  Did you have a favorite SXSW venue/set?
Tom Van Buskirk: Totally misreported, and we are the likely source of that misinformation.  We played 11 shows in 4 days.  We heard Dam-Funk was playing 13 shows, so we started saying we were playing 16.
George Langford: On the east side of town, there were a lot of BBQ backyard type shows.  Those were good parties.
TVB: The Hype Machine party was really cool.  Todd P's show at Ms. Bea's.  The Pitchfork/Windish show was our best show.

MMS: On Melophobe, I read that Yeasayer owed you money.  Are they bad poker players?
BOTH: Laughter
TVB: Yeah, man, they're crooks. Cards up their sleeves.
GL: Scam artists.  You can print that.

MMS: You two are heading out on tour with Yeasayer again?
TVB: We meet up with them on 4/3, and head out for another two weeks.

MMS: Aside from the late J. Dilla, any other artists who really influenced you?  Are there any records you'd hand to someone who asked you to explain the evolution of the Javelin sound?
GL: As of the last 3-4 years, Arthur Russell has shaped a lot of production textures I've been really into.
TVB: The Dust Brothers produced a couple of albums - Paul's Boutique and Odelay.  California albums, a junk sampling aesthetic.  When I heard that the Dust Brothers were producing Hanson's record, I wasn't sure if those were still cool references to list.

MMS: One of the Hanson brothers is in that supergroup with Adam Schlesinger from Fountains of Wayne and one of the former members of the Smashing Pumpkins... [Ed. note: the band is Tinted Windows]
GL: Isn't one of the guys from Cheap Trick in there, too? [Ed. - Bun E. Carlos of Cheap Trick is the drummer for Tinted Windows]
TVB: It's like a reality show band. Celebrity House or whatever.
GL: Celebrity Making the Band

MMS: How would you describe No Mas if you were in an elevator with someone? How did the recording of No Mas compare to Jamz n Jemz?
GL: It depends on who's in the elevator!
TVB: Talking to Quincy Jones - Quince, you gotta check the reverbs...we’re making sonic spaces, environmental sounds, a whole lotta warmth, pop music of all eras, full-fledged songs, scraps of ideas taken as far as their natural course could take them.  Kind of like a scrapbook we’re really proud of.  Goosebumps. R.L. Stine Goosebumps.  Then I’d offer him a shot of Maker’s Mark.
GL: Fucking Goosebumps
TVB: Jamz n Jemz was never meant to be a complete entity, it was meant to be an evolving idea.  The copy that finally made it out to the world and onto the Internet, that’s when we stopped evolving it.  We tried to make something more comprehensive with No Mas.  Jamz n Jemz is great because you can break it apart so easily.  All the songs on No Mas resonate.
GL: They sort of fit together.

MMS: Anything else you want to share with the DC music audience?
TVB: Working hard.  We are working hard.