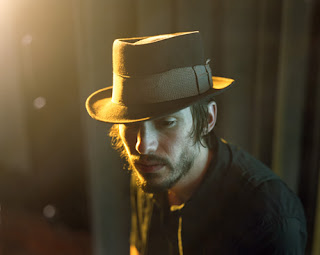 Cory Chisel might look like a scruffier version of David Blaine wearing a porkpie hat, but there is no illusion when it comes to his music. His organic alt-country sound with the Wandering Sons and the sweet harmonies of Adriel Harris is Americana from the heartland, through and through.

Chisel’s got a new album, Death Won’t Send A Letter, and he’ll be opening for Brendan Benson at the 9:30 Club this Wednesday, December 9th. I caught up with him via email:

Death Won’t Send A Letter is your first “big label” release, and you worked with Grammy-winning producer Joe Chiccarelli (The Shins, The White Stripes) on the record. Was there a certain overarching sound or theme that you were going for?
I'm always looking for sounds that elevate me in some way, and Joe has made many of those records. I figured for my first step out the door I would start with someone who has lifted me many times with sounds he helped create.

Any particular favorite tracks off of the new album and why?
Well there are always songs that present themselves as favorites for one reason or another, and I think on this record I have really become fond of the song “My Heart Would Be There”. It’s a song I have tried to record several times, and in the end we finally got something that we all felt good about.

How do you think your Wisconsin roots influence your songwriting?
Well, we get lots of time to write music in our neck of the woods... many long hours of dark winter to sit and look at our guitars. I have always been a big fan of the time to reflect on whatever is going on around us, and we have many great characters up there to paint into our stories.

I’m not sure if you like football, but if you do - How are you feeling about Brett Favre these days?
I support the guy... but I will cheer against him if he plays the Packers.

So you collaborated with Brendan Benson on the track “Born Again” – how is it touring together?
It's an ideal situation...I get to play songs night after night with someone that I admire, and enjoy working with so much. I wish all things could work this way.

What are a few CDs that you and the Wanderers can heartily agree on for a cross-country sing-along drive in the van? Feel free to mention hair metal.
Most played records right now are:
The National, Boxer
Bob Dylan, New Morning
The Velvet Underground and Nico
Leonard Cohen, Songs Of Love and Hate
The Greenhorns, untitled and unreleased record (hope everyone will hear this someday)

And finally, what do you want to leave the audience thinking after you finish your set this Wednesday night at the 9:30 Club?
I hope we make a wave in the town so we can keep riding back in as often as we can. I happen to like the town a lot...it's edgy, strange, and full of a lot of music I have been into for years.