Victoria Vox at the Strathmore Music Hall - Wednesday, September 9 at 7:30 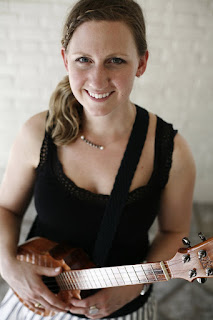 Green Bay native and current Baltimorean Victoria Vox has been selected as Strathmore's September Artist in Residence. The initiative pairs Washington-area up-and-coming musicians with established artists, and culminates in the performance of a new work commissioned by Strathmore. Her initial performance as part of the program takes place at Strathmore on Wednesday at 7:30. Her crystalline vocals simultaneously call to mind the lovely stylings of Sylvie Lewis and the effortless delivery of Patty Griffin. She's one not to miss.

Vox, a graduate of Boston's Berklee College of Music, played guitar-driven music until a friend gave her a ukulele. She found the four-stringed instrument suited her vocal range better than a guitar, and released her first uke-drive album, Victoria Vox & Her Jumping Flea, in 2006. On that record she recorded a cover of "Iz" Kamakawiwoʻole's Somewhere Over the Rainbow/What a Wonderful World medley that quietly soars, a heartfelt yet unique tribute to Hawaiian music and a star that dimmed far too soon. She released her follow-up album, Chameleon, on her own Obus Music in July of this year. The album features a track, C'est Noye, which won 1st place in the Acoustic Open Genre at the 2009 International Acoustic Music Awards.