Exercise Your Psychic Power - Telekinesis at the Black Cat 6/17 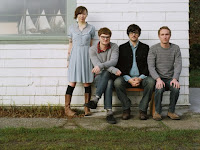 Telekinesis is really Michael Benjamin Lerner, a Seattle-based drummer and alum of Sir Paul McCartney's Liverpool Institute for Performing Arts. Lerner headlines a show at Black Cat's Backstage at 9 p.m. on Wednesday, with An Horse opening. Lerner is touring in support of his exclamatorily eponymous debut, Telekinesis!, which was produced by Death Cab's Chris Walla and released on Merge Records on April 7.

This album is going to kick-start my soundtrack for the summer with its catchy hooks, sly harmonies and surprising left turns. Songs start off quietly, almost acoustically, before the thunderous drumming of Lerner launches the tune into orbit. Filling out Lerner's touring band are David Broecker and Chris Staples on guitar, as well as Jonie Broecker on keyboards and bass. This is one band on a steep upward trajectory, so don't miss the opportunity to tell your friends that you saw them before they were huge.