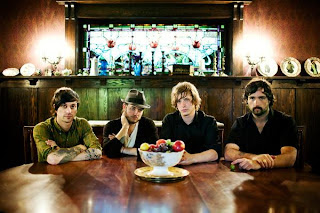 Recently I’ve been enjoying The Honorary Title’s Anything Else But The Truth.
I love the brooding melancholy and beautiful lyrics of the track “Cats in Heat” – especially dark lines like “from the liquor cabinet, choose your mood and start to wreak havoc” and “interrupted by the flickering candles, well the darkness that softens the angles.” The song surges and sighs to eventually builds to a crescendo riding lead singer Jarrod Gorbel’s impassioned, almost theatrical vocals.

The Honorary Title just released a new record, Scream and Light Up the Sky, and they’ll be in DC at the 9:30 Club this Sunday, October 7th.