Squirrel Nut Zippers at the Birchmere 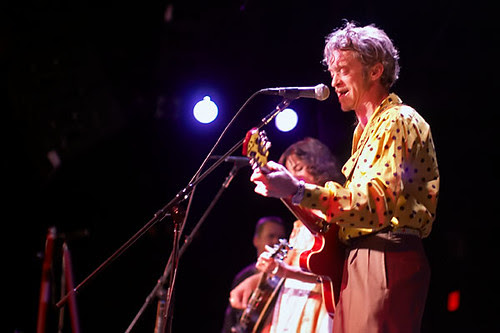 For their first show in five years, one of only four scheduled dates, the original Squirrel Nut Zippers chose to play at the Birchmere in Alexandria. And for an opening act they brought along the Old Ceremony, fellow Chapel Hill musicians and a shockingly tight band in their own right.

Necessarily, the Zippers material consisted largely of old favorites. Their last album was 2000's Bedlam Ballroom, and of the 17 tracks they performed, most dated back to their outstanding 1995 debut The Inevitable or their '97 breakthrough album Hot.

A return of the Zippers seemed far from inevitable just a few months ago. Bitterness and dissension had all but destroyed the band. Members once united by whimsy and a love of old music had worked under handshake agreements that fell apart in the rush of unexpected fame. The success of the single "Hell" from Hot shot the unassuming group into rarified heights of radio play. Suddenly, a lot was at stake. Even their amiable accord with the makers of the candy that gave the band its name became shaky.

But all that conflict forgotten for the moment, five original Zippers returned to the stage with their sheer love of old-time music showing as clearly as ever, led by Katherine Whalen and husband James "Jimbo" Mathus. Whalen in particular seemed humbled by the enthusiasm of the crowd. If the group had lost a step from their not-so-distant heyday, well, the Squirrel Nut Zippers were always more about feeling than technique anyway. An exception is the strong horn playing of Je Windenhouse, whose cornet and trumpet turns hit every stop and provided crucial punch.

Whalen's voice, an oddly affected warble, still strongly evoked a world of dusty 78 RPM records and movie musicals from the first half of the last century. Sashaying in a floral dress and vintage two-tone pumps, she exuded a shy Southern charm, swinging through understated chorus-girl poses with a steady smile. Mathus grinned like a lucky man, looking like some combination of trucker, hippy, and dandy in a spotted shirt, hiked-up pants and his own old shoes, a pair of colorful wingtips. Shoes, of course, make the band, and on this stage, every zapato was a consignment store special originating in, and worn to evoke, a supposedly simpler time.

For the second half of their single 90-minute set, the Zippers recruited two members of openers the Old Ceremony: Marc Simonsen on vibraphone and Gabriel Pelli on violin (or fiddle, as Mathus called it.) Both consummate musicians, the Old Ceremony players filled out the sound nicely and added considerable zest with their sharply-played solos. It became clear that Pelli at least had rehearsed with the Zippers: a sweet gig for a not-yet-famous player, but not more than his talent deserves.

The Old Ceremony's opening set woke up the crowd with 45 impressive and enjoyable minutes by what can only be called a jazz-quality rock ensemble: Simonsen, Pelli, keyboardist James "the Kid" Wallace, fresh recruit Josh Starmer on cello, and a solid foundation from drummer Dan Hall and bassist Matt Brandau. They knocked out ten tunes by precocious front man and guitarist Django Haskins, each combining knife-sharp lyrics, theatrically entertaining musicianship, and deeply layered pop structures. During the break, the Birchmere shop saw brisk sales of the Old Ceremony's 2006 album Our One Mistake, generally to people who'd never heard of them before. That population seems set to decline sharply in the next few years.