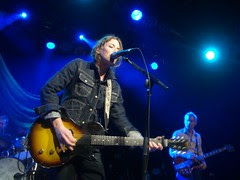 Kathleen Edwards at The Commodore, June 1, 2005
Originally uploaded by Hanson.
Occasionally, one of us may find various music news items and post them here as "Random Music Notes":

-- Last night's 9:30 Club show with My Morning Jacket and Kathleen Edwards was available via a live webcast on NPR's website (notice the concert shots on that NPR page are by Joel Didriksen of DC's Kingpin Photography). The concert will be archived and available on the NPR site. Thanks to Neil Young News and Thrasher's Blog for this information.

-- In other 9:30 Club related news, according to Mark Jenkins of The Washington Post, the club's co-owner, Seth Hurwitz, joined Bob Mould on drums Friday night at the club "on a version of the Monkees' "(I'm Not Your) Steppin' Stone" that concluded 30 minutes of encores."

Check out Richard Harrington's Washington Post review of Mould's new album, "Body of Song," here. Currently calling DC home, Mould has been keeping a blog for quite some time.

-- Coolfer.com points out that "Nirvana's 1991 classic Nevermind has joined 150 other recordings named to the Library of Congress' National Recording Registry."

-- The next Bluestate, where "your favorite bloggers become your favorite DJs," takes place next week on Thursday, October 20 at Cafe Saint-Ex. Bluestate's set for Champagne Socialism at Asylum last month featured music from DC bands Monopoli and The Hard Tomorrows.