Performing at the Capital Fringe Festival 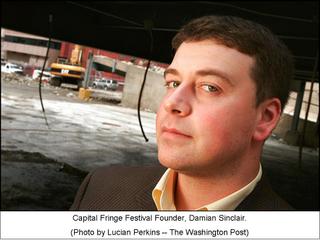 Like other fringe festivals throughout the world, the District's newest arts festival can trace its heritage to Scotland's Edinburgh Festival Fringe -- a 58-year-old alternative, open to all performers, to the Edinburgh International Festival. U.S. cities with fringe festivals include New York, Philadelphia, Minneapolis, San Francisco as well as Orlando, Cincinnati, Boulder, Colo., and Des Moines.

For 10 days in late July of 2006, downtown DC will come alive with hundreds of performances by adventurous and innovative artists from Washington DC, Baltimore, the United States and overseas during the Capital Fringe Festival. Performances will take place in more than 20 traditional and non traditional performance venues and will include performing artists producing in theater, dance, music, poetry, spoken word, puppetry and art forms that are simply unclassifiable.

If you are interested in becoming a festival performer, additional information, including the application and a Frequently Asked Questions section, can be found on Capital Fringe's web site.

Over the next year, the festival will also be looking for help in festival administration; with all technical aspects of the festival; and in the festival Box Office and House Management. Some positions will be paid, but many will be volunteer and paid through tickets to events.

Thank you to the Washington Post for this information.