A Mid-Sized Venue For DC? 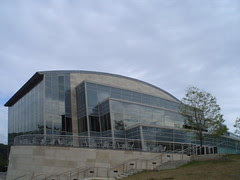 Music Center at Strathmore
Photo by mholden.
In today's Going Out Gurus chat on WashingtonPost.com, one participant wrote the following about Monday's David Gary show at Constitution Hall:

Washington, D.C.:
"Saw David Gray at DAR Constitution Hall on Monday -- great show!! But it's my third time at Con. Hall and it is HOT there! I've never sat in the floor, always in the tier, and each time I've been sweating, even when I wear summer clothes. Everyone around me was fanning themselves. Is this a known problem with DAR - everyone just suffers for a good show?"

David: "Yes, it's a known problem with DAR. The last time I was there was to see The Pixies last December, and it was like a sauna. Between that and the, um, inconsistent acoustics in there, it really hammers home D.C.'s need for a good mid-sized venue, something in between the 9:30 Club and the Patriot Center. Constitution Hall just wasn't built for rock concerts. But this isn't a new revelation..."

The Sigur Ros show at Strathmore
Photo by angellt.
Though smaller than the 3,702-seat DAR Constitution Hall and maybe not classifiable by some as mid-sized, the Strathmore Hall Music Center, a 1,976-seat concert hall opened this past February and located just outside the beltway on the Red Line of the Metro, could be one answer. With excellent acoustics and stunning design, the venue received rave reviews right from the start. While the Baltimore Symphony Orchestra calls it their part-time home and the venue has hosted many orchestral performances, could a recent Sigur Ros show presented by I.M.P. Productions--the production company of 9:30 Club owner Seth Hurwitz--and another I.M.P. presentation this coming Monday with Dead Can Dance, be a sign of things to come?