Wednesday Is For Lovers of Warm Weather and Human Flesh

Posted by Brian G Flores on August 14, 2019
Today's #WIFL post could do double-duty for #TBT, as our concert preview for this weekend includes a band I saw in April at what has, to date, been my favorite show of 2019. Summer Cannibals was one of the opening bands for pop-punk outfit Slothrust at Ottobar, a night that also introduced me to Baltimore's delightful Outer Spaces.

I've seen countless young bands and artists play, from early-ish shows by The National, Sharon Van Etten at the now-shuttered Red Palace, to Ra Ra Riot at Ottobar and Vampire Weekend at the 9:30 Club. The Summer Cannibals were a revelation, a collective that thrummed with energy and exploded with joy onstage. If the rhythm section of Devon Shirley and Ethan Butman isn't illegal in 17 or so states for its syrupy, thumping low end, it probably should be. You will dance to their music, and you will like it. Their sound draws inspiration from the bass-heavy legacies of Garbage and Hole, in addition to their discernible nod to early PNW punk and riot grrrl bands.

The above-the-fold story here is the interplay between bandleader Jessica Boudreaux and lead guitarist Cassi Blum. Watching the two of them shred onstage in Charm City, I had no idea that Blum was a relatively recent addition to the band. Summer Cannibals has undergone lineup and behind-the-boards changes in the last few years, going so far as to scrap a completed album amid the fallout of the dissolution of a relationship that crossed personal and professional lines. Blum might be the co-pilot Boudreaux needs to rocket this band to stardom, and Summer Cannibals' onstage chemistry is as tight as that of any young-ish band I've seen.

You can catch Summer Cannibals headlining Comet Ping Pong this Sunday with Field Mouse and Panini Girlfriend. DO. NOT. MISS. THIS. SHOW. 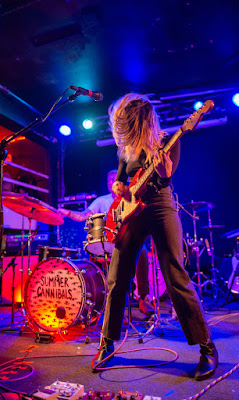 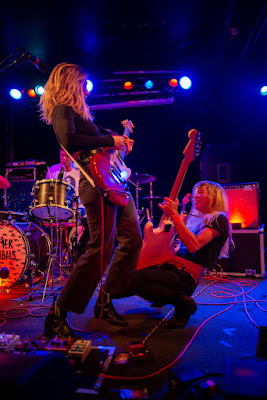