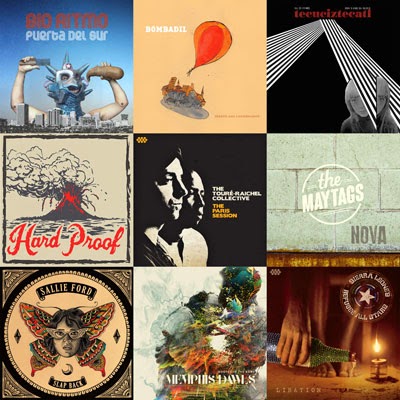 As a music writer, I'm not a big believer in "Best of" lists. Tastes and preferences are wildly subjective, and unless you cover music as a full-time beat you're bound to miss 1 or 2 singles, albums, or entire genres of music in any given year. I do this as a sideline because I love music, and because I have seen its power to uplift and transform individuals, groups, and even movements.

This is a collection of albums, EPs, and singles that were featured in this blog in the last year. Some of them garnered significant press, while others slid under the radar into our collective musical consciousness. Albums from Bio Ritmo and His Name Is Alive demonstrated musicians solidifying their reputations as master practitioners. In contrast, new releases from The Maytags and Sallie Ford showed that those bands' leaders had the daring to risk changing musical direction and the skill to pull it off. Each work in this list touched me in some way, insinuating itself into my understanding of the musical universe and how I interact with it.

In no particular order, here is my 2014 musical year in review:

Puerta Del Sur by Bio Ritmo - This Richmond-based salsa band continue to craft albums that redefine the American salsa music scene, and Puerta Del Sur (Gateway to the South) is no exception. From the big band sound of the 1950s to the Nuyorican scene in the 1970s to the modern Afro-Caribbean-influenced sound, Bio Ritmo has established themselves as one of the standard bearers of modern salsa. This year culminated in a Tiny Desk Concert at NPR's shiny new HQ.

Tarpits and Canyonlands by Bombadil - I wrestled with whether to include this one in my musical year in review, as it is technically a re-release of an album from 2009.  The enigmatic North Carolina trio lost a couple of years of momentum to a neurological ailment suffered by bandleader Daniel Michalak, but they're back in full swing producing new music and touring pretty relentlessly. I know I've said this before, but Bombadil are the musical equivalent of a Wes Anderson film - juxtaposing thoroughly modern sensibilities with a style that harkens back to some long-gone and ephemeral golden age. Tarpits and Canyonlands is a perfect example of this, an album that's simultaneously sad and happy and odd yet familiar.

Teuciztecatl by His Name Is Alive -  I'm not going to attempt to pronounce this one or spell it again. His Name Is Alive is the brainchild of Warren Defever, a Detroit-area experimental musician and producer who could be Sufjan Stevens' elder, slightly more offbeat brother. This album is a throwback to the grand concept albums of the 1970s, and rehearsals included playing along to a supercut of every single Thin Lizzy guitar solo. It's beautiful and bizarre and utterly unlike almost any other album released last year.

Soul Thing b/w Lake Tana by Hard Proof - This single by the Austin Afrobeat collective was released in conjunction with the tongue-in-cheek Cassette Store Day. Their concert at Tropicalia was one of the live music highlights of my year, as their rollicking tight yet improvisational style needs to be experienced in the flesh to be fully appreciated. These guys are scholars of the genre without being pedantic. They blend multiple African musical styles seamlessly, filtering the Nigerian funk through the lens of Ethio-jazz pioneer Mulatu Astatke.

The Paris Session by The Touré-Raichel Collective - A Malian guitarist and an Israeli pianist bump into one another in the airport. The leadup to a joke? No, the real-life encounter between Vieux Farka Touré and Idan Raichel that spawned two cross-religion and cross-cultural collaborations. Their haunting, austere cover of 'Diaraby', written by Vieux's father Ali, might be my favorite song of the year.

Nova EP by The Maytags - Iowan Dustin Smith is a musical chameleon, shifting directions from the alt-country Sunday Silos to the brasher and bluesier style of The Maytags. They're smoother, and a bit more downtempo, than St. Paul and the Broken Bones, the Temptations to their southern counterparts' Four Tops.

Slap Back by Sallie Ford - After the breakup of her previous band, Sallie Ford wasted no time putting together her dream project - an all-female ensemble. The resultant debut, Slap Back, was one of my favorite albums of the year. It's bold and libidinous, audacious but not unaware.

Libation by Sierra Leone's Refugee All Stars - We conclude our wrap-up of 2014 with one of the year's most joyous records. The All Stars channeled the tragedy of their home country's civil war into their music, recording their debut on salvaged and improvised instruments while taking refuge in Guinea. They've traveled the world since then, sharing their story and their music while raising funds to benefit Sierra Leone. This album commemorates the friends and family the band members have lost, and does so with one of the year's most raucous music celebrations.
2014 Bio Ritmo Bombadil Hard Proof His Name Is Alive Sallie Ford Sierra Leone's Refugee All Stars The Maytags The Memphis Dawls Touré-Raichel Collective