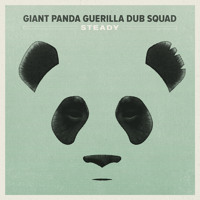 Giant Panda Guerilla Dub Squad, the Rochester-based reggae outfit, possess one of my absolute favorite band names. This hard-working quintet, no stranger to musical experimentation, is touring in anticipation of the release of another musical gem, the aptly-named Steady.

The new album, their first on Easy Star Records, takes us down yet another of the roads less traveled. Steady is their first record following a pair of markedly different albums in 2012 that channeled psychedelia and Americana (In These Times and Country, respectively). Steady charts an ordinal course in between those two releases, at turns more rocksteady than reggae (a la Carlton and the Shoes). The album's lyrics showcase a more introspective, and dare I say, mature perspective. In addition to Steady, the band has recorded an as-yet untitled sequel to their Americana album Country, to be released in early 2015 on Easy Star. If I didn't know better, I'd think they aspired to be the Ryan Adams of reggae.

Although Steady doesn't drop until September 30, you can get an early taste of the album by catching GPGDS this Friday at Tropicalia. This is a 21+ show (sorry, youngsters); doors open at 8pm, and tickets are $10 in advance or $12 the day of the show. Until then, take a listen to the title track of the new album.