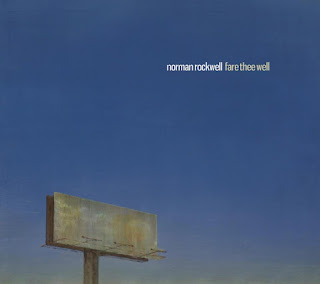 Northern Virginia folk rockers Norman Rockwell are preparing for the release of their debut album, "Fare Thee Well",  this Saturday, October 20th at Vienna's Jammin' Java. MetroMusicScene was lucky enough to hear a preview of the album, a strong debut in the spirit of The Avett Brothers and Noah and the Whale.
This is music for a sweltering summer day, the kind of album you'd put on when riding down a dusty county road with the windows open, the radio blaring, watching the storm clouds forming on the horizon. This quartet is fronted by a pair of vocalists, Joshua Johnston and banjoist Ben Hirsch. Individually, Johnston's tremulous vocals falls somewhere in between the wailing tenor of Clap Your Hands Say Yeah's Alec Ounsworth and the speak-singing of NatW's Charlie Fink. Together, Johnston and Hirsch's vocals complement and ricochet off one another, not unlike Seth and Scott Avett or Carl Newman and Dan Bejar of The New Pornographers. Rounding out the quartet are bassist Sean Meyers and percussionist Nathan Read.
You can check out one of the songs from "Fare Thee Well", the aptly named 'Stateline'. This track, inspired by a band member's commute back and forth from home in Virginia to college in Vermont, tells the story of a journey that is as much intellectual and emotional as it is physical, as well as the transition from childhood to adulthood.
Doors open at the CD Release and After-Party at 7pm, and tickets are $15.
Fare Thee Well Jammin Java Norman Rockwell

Anonymous said…
Glad to see Norman Rockwell getting a well deserved good review. They are a great band and this is an accurate review about their style too!
10/17/2012 9:19 PM