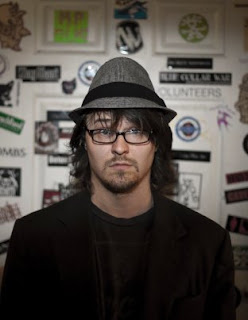 Fresh off a nationwide tour and SXSW showcase, our friend Adrian "Hardkor" Krygowski returns to DC with a new album, Hope for Us, and an album release show at The Dunes on Friday, April 20. Hope for Us, recorded in Nashville with Ed Pettersen and featuring guest vocals from Garrison Starr, is another step forward for this unique talent.

A little less Vic Chestnutt and a little more Rodney Crowell, the album features a more fully realized and country-inflected sound. Adrian takes the listener along with him on a journey through his own personal growth, the failure of a relationship that doesn't work despite the best of intentions, and his path to reconciliation and redemption. He shares marvelous musical chemistry with Ms. Starr, their duet recalling the great country pairings of Conway Twitty and Dolly Parton or the aforementioned Crowell and Emmylou Harris.

Opening for Adrian will be our old friend Justin Trawick, as well as Wes Tucker & the Skillets. Doors are at 7pm, and tickets are $7.