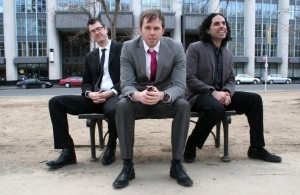 DC and Baltimore-based trio Bravenoise are kicking off their selection as an Earth Day Ambassadors with an Acts of Green campaign with the goal of offsetting the carbon footprint created in the production of their album and the corresponding tour. Their debut, Everything Was and Everything Will Be, is a sexy and cosmopolitan J. Robbins-produced affair that demonstrates the breadth of the band's influences, from The Police and Radiohead to Antonio Carlos Jobim and João Gilberto. Featuring both uptempo rockers like "A Night of Pleasure" and sultry ballads like "Come Onto Me", the album has something that will appeal to every rock fan.

The first stop in their Acts of Green campaign is the RAW: natural born artists Menagerie showcase at Cafe Asia on Thursday, April 12. Running from 8pm - 2am, the showcase features art, music, photography and fashion. The event is 21+, the attire is fashionable, and and tickets are $10 presale/$15 at the door. Don't miss it!