MMS Album Review - A Ring Around the Atlantic by Peter Maybarduk 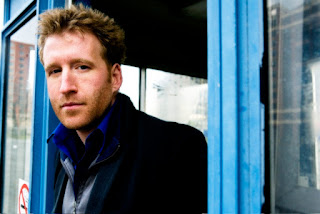 I recently became acquainted with the music of DC-based singer-songwriter Peter Maybarduk, a human rights lawyer by day and spinner of yarns and dreamer of dreams under cover of night. He released his second studio album, A Ring Around the Atlantic, on December 1, and along the way earned himself a nomination in the Rock/Alternative category of this year's Mid-Atlantic Song Contest for his track "The Great State of Maine".

By turns a world music album, field recording, and power pop showcase, A Ring Around the Atlantic is thoughtfully written and orchestrated and features the standout production value of The Magpie Cage's J. Robbins. Maybarduk's voice, breathy and soft, reminds me of Hey Marseilles' Matt Bishop and Michael Benjamin Lerner of Telekinesis. His songwriting is thought-provoking without being pedantic, helped by the album's relentlessly catchy hooks and strong backing musicians.

This is not an easily digestible album, but one well worth the listenings necessary to appreciate it. The tracks that incorporate field recordings, such as "Very Very Suffer" and "Atlantic in Languages", add a lovely sense of texture to the album, and the seemingly hidden final track "En La Habana" throws a Buena Vista-esque curve ball at listeners. As a second album it is a surprisingly strong effort, and I predict that Peter will be a fixture in local (and perhaps national) awards competitions in the coming years.
J. Robbins Mid-Atlantic Song Contest Peter Maybarduk Songwriters' Association of Washington The Magpie Cage