Do you know what SK6ERS means? 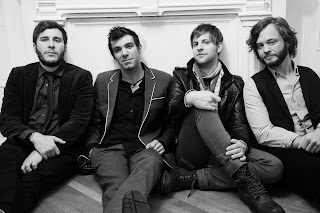 That's fan-speak for Stephen Kellogg and the Sixers, the Western Massachusetts-based quartet that's made a name for themselves on the strength of relentless touring and raucous, instrument-swapping shows. "Skunk" Kellogg, the bandleader, describes his sound as "Ryan Adams meets Guster", and comparisons to the rootsy guitar-pop of the Mat(t)s - Kearney and Nathanson - are appropriate. Joining Kellogg in the Sixers are bassist (and modern dancer) Kit "The Goose" Karlson, drummer Brian "Boots" Factor, and guitairst Sam "Steamer" Getz. Musically versatile, this almost alt-country foursome will switch places during gigs and incorporate unusual instruments like the tuba and the keytar into their shows.

The SK6ERS are hitting the 9:30 Club this Saturday in support of their fifth studio album, Gift Horse, a balanced and mature record featuring jaunty rockers like "Gravity" and stripped-down ballads like "My Favorite Place". Jon McLaughlin, the piano-based power popster best known for his appearance in the 2008 film Enchanted, opens the show. Doors are at 6:30 pm, and the tickets are $20. Take a gander at the video (and the lyrics) for "Gravity", the new single from Gift Horse.