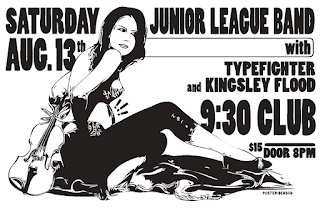 Whether you're a frequent traveler, casual listener, or just-plain-slow-to-get-onboard the Junior League Band express, Saturday night's show at the 9:30 Club is your absolute last chance to catch Lissy Rosemont and her band for the foreseeable future. Have you been telling yourself that you'd catch them the "next" time they play a gig? Have you been waiting for the right headlining gig, and for the cosmic tumblers to fall into place? If so, the future is now. Scientist-cum-multi-instrumentalist Rosemont has embarked upon her most ambitious biology project, and will be taking a little break from recording and touring following the birth of her daughter. The concert will double as an early birthday party for Rosemont, who turns 30 on August 17th.

The Atlanta-born Rosemont defies easy categorization, and in her voice one hears the the rootsy earnestness of Gilian Welch as well as the abstruse seduction of Jenny Lewis. Her band - which features drummer Will Waikart, bassist Brandon Kalber and guitarist John Lee - rounds out the sound of this multi-talented fiddler, banjo- and harmonica-playing vocalist.

Opening for the Junior League Band are Kingsley Flood, the Boston-based new Americana band and recent NPR Song of the Day selection known for their blistering live shows, and DC indie rockers Typefighter, who sound more than a little like Blind Pilot covering Thao with the Get Down Stay Down.

Doors open at 8pm, and the cover is $15. All aboard!
9:30 Club Blind Pilot Junior League Band Kingsley Flood Lissy Rosemont Thao with the Get Down Typefighter