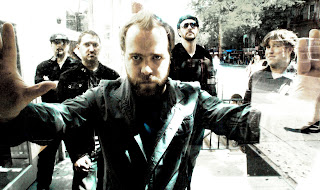 Our friends in The Dreamscapes Project are back with their multidisciplinary performance piece The Twelve Days Project.  The Day 9 single is Bellwether, an uptempo number reminiscent of chamber pop stalwarts Ra Ra Riot, The Arcade Fire and the Decemberists.  The prominent string arrangements, sudden tempo shifts and anthemic battle cry of "Let's Go" during the song's bridge highlight the depth and versatility of one of the DC area's longest-running bands.

The 'Scapes will hold a benefit concert for the USO of Metropolitan Washington on Thursday, September 30th, at Bethesda's Union Jack's, from 8:30 to 9:30 p.m.  A suggested donation of $10 gets you a free drink and a raffle ticket to win great prizes.