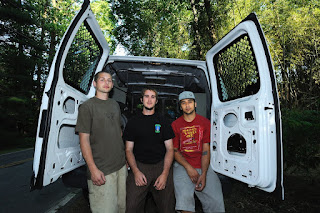 Local dancemasters GroundScore have a sound that's tough to pin down - heavy on the reggae with a nod to DC's seminal punk scene and built from the ground up to make you want to shake your money maker.  This trio, featuring vocalist and guitarist Zach Bellas, bassist Nick Graves, and drummer Chase Lapp have been making the rounds of the DC music clubs since 2008, and they released their debut album, Healthy Children, in December of 2009.  Honing their chops by opening for bands like Clutch, the boys are now ready to stand front and center with a headlining gig on Friday the 13th at the Red and the Black.  The show starts at 8 p.m., and the cover is $8.

We conducted a little Q&A with GroundScore in anticipation of their show, and they were gracious enough to provide us with an MP3 for MetroMusicScene readers to download.

MetroMusicScene: Your music incorporates punk, reggae, jam and dance influences.  How would you characterize your sound in a sentence?
GroundScore: Free-formed, simplified, Americanized reggae with an honest punk mentality and ethos.

MMS: Where is the favorite concert venue you’ve played, either here or elsewhere in the US?  Where is the place you dream about playing?  Do you have a favorite story about a gig?
GS: Some of our best shows have been at places not officially established as venues yet or at venues no one has heard of.  Officially, however, would be The Rock n’ Roll Hotel in DC because it’s a very unique venue in a really cool up and coming neighborhood for nightlife. Everyone was really nice to us when we played there and the show was insane.  Another favorite was playing at Sonar in Baltimore to open for Clutch.  We hadn’t been a band for very long and were excited about our busy summer schedule which included various gigs across the DC metropolitan area. Chase, who was on the road as Clutch’s drum tech for the previous month and a half, got them to put us on the bill even though it was a sold-out show.  We had no time to rehearse for the show, hadn’t played together in months, and were thrown up on stage in front of 1,400 plus die-hard Clutch fans.  We played really well, people asked us for autographs, and this guy had his ten year-old son (sporting a serious Mohawk) got up to shake Zach’s hand. No one threw anything at us like they did to the band after us.  Plus we got to hang out with our friends in Lionize and watch a killer Clutch show from backstage. With regards to dream venues, We all love going to the really big, multi-day festivals with eclectic line-ups like Bonnaroo, Lalapolooza (when it was a touring show), the old HFStivals, Coachella etc…So, playing something like that would be a dream come true.

MMS: What artists do you credit with inspiring you to make music?  What’s your dream concert lineup?
GS: Chase: Jean- Paul Gaster (Clutch) and ?uest Love (The Roots) both have unbelievably deep musical influences they use to come up with drum stylings.

Nick: Seeing huge stage productions like Pink Floyd were really inspiring but going out to see Electric Six at Little Brother’s in Columbus, OH really did it for me because I knew someone in the band and that made it seem like playing music for a living was a reachable goal.

Zach:  I used to watch MTV non-stop with my older brother in the late 80’s and, I hate to say it, but watching Jon Bon Jovi fly around from stage to stage with explosions and fire everywhere in the ‘Living on a Prayer’ video.  I was like 5 or 6 but I remember thinking that was what I wanted to do. Our Dream concert line up would include a whole bunch of bands with dead members unfortunately.  Getting on a big festival with a real eclectic line-up would be the dream though.

MMS: Tell me about Healthy Children.  Where did you come up with the name?  What story does the album tell?  Is there a new album in the works?
GS: I can’t remember the exact moment we came up with the title ‘Healthy Children’ so it’s a complicated answer, but it’s sort of a reaction to the modern American dream of raising healthy, happy children and how simple of a notion that seems but, in reality, it is quite difficult to achieve. The album itself attempts to speak for a lot of the kids we met out on the road traveling the festival circuit during the summer before the band was ever formed.  A lot of these kids didn't have a functioning immediate family and filled that void by ganging together in various parking lots for festivals and shows, selling drugs for money and creating a support system for each other.  It was eye opening to experience the culture and day to day life of the ‘lot kids’ and that’s also where we picked up the term ‘groundscore’.

We also have a new album in the works and we are really excited about going back in the studio with J. Robbins who worked with us on ‘Healthy Children’.  We are trying to get back in there in December or January in order to release it next spring.

MMS: I saw some girls bring Eli “Paperboy” Reed and his band some pies (from H Street’s Dangerously Delicious).  Have your audience members ever brought you interesting offerings (of the non-undergarment variety)?
GS: Nothing that cool as of yet.  We usually just get offered alcohol from our crowd, but sometimes clothes too!

GroundScore - Gifts in the Corner