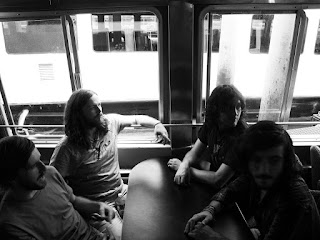 Baltimore rockers J. Roddy Walston and the Business are hitting the road in anticipation of the July 27th release of their self-titled debut album.  Combining the rock bombast of the Arcade Fire with the cowpunk sound of the Avett Brothers, J. Roddy's manic live show is living proof that sometimes you have to "put it up to 11".  J. Roddy plays the piano like Keith Moon played the drums, with an exuberance that must be experienced to be believed.  At a recent gig playing a boat party in New York, J. Roddy ended the show by tossing his piano stool in the East River.

The boys were gracious enough to not only participate in a little Q&A with MetroMusicScene, but also provide us an MP3 to download.  Catch them this Friday at the Rock & Roll Hotel; doors open at 8:30, and the cover is $10 advance/$12 DOS.

MMS: J. Roddy, the frenetic energy of your live shows is well known.  What was the biggest challenge in capturing that sound on your record, and how did you go about meeting the challenge?

JRWATB: what we do on stage isn't planned, it's reactionary...and a lot of the energy we have comes from the interaction we have with the crowd....
the better the crowd the more insane we are going to get.
obviously in the studio there is no crowd..so we had to come up with a way to bring in that extra power.
so we decided we would record the whole thing in 8 days and did as much of the tracking as possible live.
also we hired the singer from spin doctors to point a gun at our heads while we were tracking.

MMS: Tell us about the Business, how they came to be and the current members of the band.
JRWATB: billy gordon(lead guitar) has been in the band the longest ... i saw him playing with another band the first show i played in baltimore. i asked him to do the right thing and quit that band and join mine.

steve colmus (drummer) steve was playing in a couple of bands, i ended up winning him in a poker game. you can win some strange stuff at the poker tables in glen burnie.

logan davis (bass) i am living in a cabin down in richmond va right now and when zach(our old bass player) quit i asked the locals who the most bad-ass musician with long hair and a beard was.... one name kept coming up.

MMS: Where is the favorite concert venue you've played, either here or elsewhere in the US? Where is the place you dream about playing?
JRWATB: the greatest venue we have ever played was the magic stick in detroit. this place had a bowling alley downstairs, a divey pizza joint, a nice cafe and killer venue. we bowled for free ate for free it was amazing. also meg white showed up in time to see our van explode in the street.
also the southgate house in cincy is amazing.

we were really wanting the gig as jay leno's house band but train got that.... so i guess that dream is dead.

MMS: I heard about you tossing your piano stool into the East River recently to end the show. Is that the most rock & roll thing you've ever done to cap off a gig?  What can the audience at the Rock & Roll Hotel expect from you on Friday?
JRWATB: well as far as the east river stool toss, i just love to litter and normally i don't get to do that at a show so i had to seize the moment.
there was another show in nyc that i went to jump over my piano but i ended up flipping over the piano and ripped my self up pretty bad.
bleeding is always a good show ender.
d.c. can expect that i am going to use my slow hand to rip it up and my fast one to put it back together.
MMS: How was your experience playing SXSW this year?
JRWATB: sxsw was amazing this year. we played a bunch of rad shows and basically had the experience every band hopes to have at sxsw.
but it's basically music exec spring break down there so you have to be careful or you might get rufied and wake up having
committed a mortal sin with the head of sony.
MMS: What was the most memorable part of SXSW?
JRWATB: we played a show with andrew w.k. seeing him live was off the charts.
we also ended up not having a place to stay so we were just sleeping outside, one morning i woke up and the sprinklers had come on
and billy was just sleeping through it...that's how tired you get at sxsw once you hit the sack someone could stab you and you're not waking up.