Words With These United States 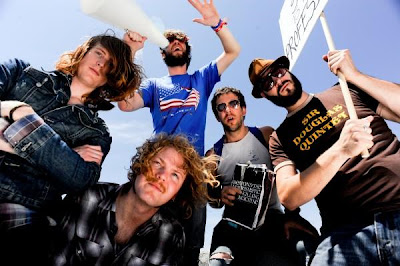 These United States are bringing their folky-rock stomp to the Black Cat this Saturday, May 15th. And what might you be in for? Check out the pulsing urgency of their live performance of “I Want You To Keep Everything” at the 2009 CMJ Music Marathon here. I spoke to lead singer Jesse Elliott this week via email about the band’s territorial preferences, future recording plans, and Elliott's apparent Phil Jackson mancrush.

So you've gotten a chance to tour around the nation, and now inquiring minds want to know – have you finally decided on a favorite state?
As with most things in These United States, this would be a matter of serious internal contention. Tom would go with Texas, maybe cause we’ve been here all this week and the weather’s been amazing and the crowds’ve been raucous. Justin’s thinking Kentucky – that’s where he’s from, and occasionally makes it back to when we’re not touring. In this sense, Justin’s keeping it very real. Colin’s seconding the vote for the Bluegrass State. “Anywhere but Pennsylvania,” Robby says – just to spite Tom. That’s where Tom’s from. In this sense, Robby is keeping it somewhat real. If I could live in the mountains of Idaho and somehow make Chicago and Denver and New York and Detroit and San Francisco all come to me on alternating weekends, I’d be in a state of total bliss.

What are you most proud of about your most recent album, Everything Touches Everything?
It’s the first record we did with the 5 of us here now, so in that sense it’s a new direction for us. We had a bit more time to work on it than the first two, and getting all the tracking done at Inner Ear with T.J. Lipple was a blast – nice to do that right in our own backyard in DC. We also love the album art, by this guy John Malloy, a truly amazing graphic novelist from Baltimore.

And anything up your collective recording sleeves for the future?
Definitely. July 20th. What Lasts. Be there or be square.

What’s your songwriting process like?
Songs come from all over, though for me they’ve always been more of an externally induced thing. I don’t have a lot of feelings – not ones that I think are interesting enough that people’d wanna hear all about them, anyway. The stuff that interests me in life is usually the stuff I wanna point to when I’m walking through a new place with an old friend. Strange check-out ladies, gothic architecture, names I’ve never seen that seem like they might’ve come from other languages up on street signs. That’s the matter. The means is just those sketches I make stitched together more cohesively by the 5 of us, made more beautiful sometimes, sometimes just Frankenstein’ed until they’re a big grumbling ranting rocking slightly unnerving but generally well-intentioned kind of a being striking out into the world on their own. We do all this is a small dark basement, like most musicians.

When you’re out on tour and spending long, close hours in a van, what are three CDs you can all agree on for a long drive?
We only have two. Love and Theft – that’s Dylan’s – and, breaking to the front of the pack recently, Shame, Shame, the new Dr. Dog one. Mostly, we just listen to Radiolab, a podcast from WNYC that lights all of our brains on fire. Blinded by science!

And which of you has the best skills behind the wheel? Don’t be humble.
You gotta send different players in from the bench depending on what plays you’re calling and who you’re up against, you see what I’m saying here with this sports analogy I’m using? For instance, late nights, post-show, long-haul endurance, just barely getting through to the other side of dawn thanks mostly to Yo La Tengo, that zone is just owned by Tom. Justin comes through in a serious last-minute audible emergency – he recently saved everyone’s lives when our rear right tire blew out going 70 on the drive back from South by Southwest. I’m a bit of a utility man, known primarily for quick instincts and agile maneuverability – good in the mountains, even better in the cities, the more obstacles the better. You gotta know your talents and stick with 'em. Never be humble, exactly, yes – except in deference to the road itself. That thing is your master, and it’s a wildly undulating hydra-headed chameleon kinda beast to boot. You gotta be Phil Jackson, ready for any opponent, but real zen about it all. Life and life only.

I see you’re playing Lollapalooza this summer, very cool. Who are you most looking forward to seeing while you’re there? And it’s really OK if you say Lady Gaga…
Phil Jackson.

What do you want people thinking after you finish rocking the Black Cat this Saturday?
“The show that was just put on by These United States which I just saw at the Black Cat, that show really inspired me. It made me want to be a better person. Not necessarily a good person. Just better at what I do, like even if what I do is just being a rotten no-good bohemian of a drunk who occasionally, usually accidentally, gives someone around me a new eye on things, just a tiny little momentary sparkle in what’s an otherwise grating and grueling world to live in. These United States make me want to take that all to the next level…”

MP3: I Want You To Keep Everything (live, HearYa sessions) – These United States