Quasi @ the Black Cat: A Review 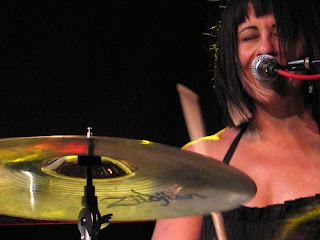 About midway through Quasi's short but sweet show at the Black Cat April 24th, drummer Janet Weiss said, "This is really different from the last time we played here." I can only presume that she was referring to the size of the audience, which even with plenty of elbow room only filled up a third of the hall. Nice for the audience, as was the ticket price which, at $13, was the least I had paid for a show in a long time and was more typical of a band just starting out than for credentialed indie royalty.

The small crowd did not deter the Portland, Oregon-based band from delivering a powerhouse performance. Opening with "Repulsion," the first song on their latest release, American Gong, they mostly played material from that CD, which introduced bassist Joanna Bolme into the band, increasing it in size by half and injecting a more muscular electric sound that relies less on the warbling of the keyboards. The lyrics, still slashing and poignantly cynical, are no longer delivered in the dreamy lilt that took the sting out of the dark sentiments. Gone is the plaintive reediness in Coomes' voice, which sometimes actually strains hoarsely to compete with the driving guitar chords.

On stage they played without frills, putting all their energy into the music, though Coomes did do a few guitar jumps during "Bye Bye Blackbird," a swirling acid-rock-meets-carnival-music tune that punctuates a nursery rhyme-like song with tremendous, crashing crescendos of discordance. The band members didn't introduce themselves, the banter was sparse and a little self-conscious, and they didn't wait around for the applause before ripping into the next song. Drinking beer in a sleeveless dress and playing a big bass guitar with implacable assurance, Joanna Bolme was the most glamorous of the trio. Janet Weiss played the drums with that trance-like concentration that all great drummers slip into, holding up the weight of the song with every fiber of their being, like Atlas single-handedly bears the burden of the sky. The energetic core, hair flopped into Sam Coomes' eyes as he went from keyboards to guitar, leaned into the microphone, and provided the harmony that stitched the drums and bass together.

They played for about an hour, running through most of the catchier songs from American Gong, including "Everything & Nothing At All," "Black Dogs and Bubbles," "Rockabilly Party," and "Laissez le Bon Temps Roulez." Fifteen years after Quasi released their first album, that song's lyrics perhaps embody the philosophy of the mature musician in a musical form that favors the youthful. As individuals, the members of Quasi have played with everyone from the late, great Sleater-Kinney and Elliott Smith, to Stephen Malkmus & the Jicks and Bright Eyes. "You might say your race is run or you can rise up on the sound in the center of the sun ... I used to be mad, not crazy, just mad, not anymore, the receding taillights of a teenage dream." Not only is rock and roll not the fountain of youth, but it often eats its own young. Getting older is not for sissies, especially if you are a rock musician.

Performing only a few songs from other releases, including "All the Same, "Sword of God," and for an encore, that great Portland anthem "It's Raining," they ended the show with a perfect rendition of "Pictures of Lily," another song about the dangers of being misled by dreams. Quasi hasn't given up their dreams, they have brought to them a steel edge, pulsing beats and ferocious chords that do not go gently into that good night.