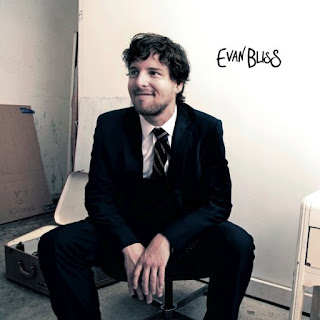 Evan Bliss is a singer-songwriter who's a native of Bethesda, Maryland, a holder of several single-season and career lacrosse records at Kenyon College, and the former frontman of DC reggae rockers The Low Life.  Evan celebrates the release of his new solo record, ShhhPOW, at the Hard Rock Cafe this Thursday, March 18, at 8:30 pm ($10 cover).  A portion of the proceeds from the sale of the album will be donated to benefit the Holster Project, a philanthropic initiative of Evan's label Holster Records.

In addition to readying his new album, Evan's been busy in the world of extreme sports.  His music has been featured in ads for Reef, a leading maker of surf-inspired footwear, and he and his band were recognized as a local band to watch on the Baltimore stop of the Mountain Dew Action Sports Tour, a nationwide extreme sports summer tour.

I interviewed Evan for the blog, and he was gracious enough to provide MetroMusicScene readers with an exclusive first look at a track from ShhhPOW.

Evan, why don’t you tell us where you came up with the name of your new album, ShhhPOW? What is the central theme or message of the album?

Initially I was searching for something profound, a title that could end hunger or make rockets explode with jellybeans, but I had nothing. So I named it ShhhPOW, because the album is part Shhh and part POW, and it's fun to say out loud or to yourself.

I know it’s probably a bit like asking a father to pick his favorite child, but what’s your favorite track from ShhhPOW? Why?

It'd be easier to pick a favorite child. Sonically I love them all for different reasons depending on mood or present company. The bonus track, Pula Aena, stands out for me because it was a live performance at Sirius/XM Studios with The African Children's Choir. Not only were they unbelievable singers and amazing kids, but they learned a song I wrote for my brother in only a couple days while touring the east coast. Emotionally overwhelming in the best way imaginable.

What are the similarities you see in your music now and the music you performed with The Low Life? What do you see as being different from that music?

Frank Sinatra was known as an “athletic” singer, doing breath-holding exercises underwater to improve his breathing ability while singing. You were a college lacrosse player at Kenyon. Tell me about how your athletic experience informs your music.

Didn't know that about Sinatra, I just heard he used to pay a guy to wake him up from his cat naps so he could stay out partying all night. I heard the wrong story I guess. Music is much more physical than people realize and having an athletic background taught me focus when the stamina starts to fade. If you lose focus because you're tired in the studio you miss changes or timing and ruin takes, and on stage you risk sounding and looking like an idiot. The central union between band and sport is team. Everyone is performing different tasks to attain a shared goal. Plus there's lots of yelling and butt slapping, and I couldn't give that up.

While we’re on the subject of sports, you’re gaining quite a name in the extreme sports world.  How did that come about?

Honestly that's been an pleasant surprise. We've been lucky enough to get contacted by athletes, companies, video biographers, webcasts, etc, and that's something we'll always say yes to. I feel a strong connection to those guys. They're out there everyday doing what keeps their heart pumping out hot blood and go above and beyond for their fans. If our music can keep providing a piece of their personal soundtrack we'll never say no.

Your lyrics are occasionally deeply personal. Are they mostly autobiographical, or is your approach to songwriting a bit like writing fiction?

Laced within all the lyrics I write is truth and fiction. Sometimes one more than the other, sometimes I think one and it's really the other. Life is lived and watched. Too much of one is unhealthy and revealing, so I'm always trying to attain some sort of equilibrium.

While we’re on the subject, what are your literary and artistic inspirations?

Your label, Holster Records, has a strong philanthropic component to its mission. Can you tell me a bit about the Holster Project, and what motivated you to seek out a label like this?

Growing up in the DMV is the only answer. DC's an amazingly strange city overflowing with hope and cynicism, comprised of young people fighting to express their voice, and those struggling to find it. Holster's goal is to awaken youth to philanthropy through art and music. The smaller the world gets due to the rapidity of information flying at you the scarier it becomes. Some people desire direction, I'd like to be a person that opens up a direction that benefits all of us, and being able to use my passions and talents to do so makes that an easy decision. Holster also has the softest t-shirts that have ever touched my skin.

Are there any artists and producers with whom you’d like to work?

I'll work with anyone, as long as they're open to ideas and willing to try all of them, and I expect the same from me. Obviously the perks would be that they are wholly invested in the project from artistic to professional to personal. If I could figure out what causes people to gel and make magic I'd zero in, but until then trial and error with the best looking girls getting first dibs. Presently, playing with Jason, Eric, Shareef and Josh makes it difficult to dispute silly ideas like fate and Calvinism.

Where is the favorite concert venue you’ve played, either here or elsewhere in the US? Where is the place you dream about playing?

That's tough. As much as I loved the 9:30 Club I hated playing there because I got so nervous. It’s the only show I have ever got nervous for because growing up it was the end all be all for me. So I'd either not drink and choke, or drink too much and suck. But that place is the epitome of class covered in tattoos. The Recher in Baltimore never failed to shock and awe. Touring Europe's been a dream, along with USO shows. Maybe the Grammy's or MTV Awards, but any sweaty packed house with people singing along and dancing their big hearts out is a close second.