The Galaxy Hut Gets Ravenous Tonight 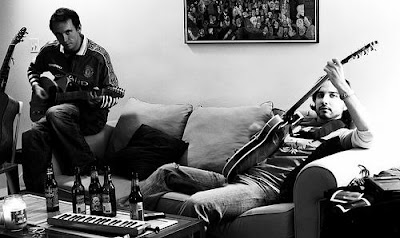 R-A-V-E-N-O-U-S.
Are you ready? Flyin’ first class into Galaxy Hut tonight is Silver Spring’s Ravenous, whose edgy sound and spry antics will leave you hungry for more.

Their debut show at the Red and the Black last month had fans spilling over into the stairway, eager to infuse themselves with energy from what promises to be a solid addition to the DC music scene.

The newcomers – Alex, Ben, Mattson and Taylor – bring a raw, unpolished sound that harkens toward Spoon and The Rentals. Their angular, angry rhythms are reminiscent of Weezer; they give way to introspective, playful lyrics.

“I lit a candle for a saltwater sage,” Ravenous sings in “Saltwater Taffy (The Dock).” “He mixed cocktails from a martian; everybody got laid.”

Paired with Ravenous on Monday are veteran DC rockers North of Canada (pictured above). Intense dueling effects created by the band’s two guitarists, Drone City and Mr. Robert France, will enliven the crowd pre-Ravenous, filling the small space with a dynamic sound. Two substitute band members fill out North of Canada’s lineup for Monday – drummer Dave of Practically Einstein and bassist the Ministry of Information, formerly of Gaslight Society.

North of Canada rounds out carefully crafted melodies with inventive lyrics, even devising words like “octo-green.” (Don’t worry – no octo-moms were harmed in the writing of the song.)

Known to don all-white outfits, give soulful speeches about their grandmothers and masterfully accomplish somersaults on stage all in one show, North of Canada adds crowd-pleasing power to their musical punch.

Combined with their spirited shenanigans, the band’s raucous “Feel” and thought-provoking “NASA Doesn’t Know What’s up in our Sky” will more than whet your appetite.

So much, in fact, that you’ll leave the night Ravenous.

Photo: Rich Lee / North Of Canada MySpace
**Special thanks to Lindsey Wray for contributing this preview**
North of Canada Ravenous