Posted by Brian G Flores on November 21, 2009
Pink Jams!, the project started by Christa Floresca to raise money for breast cancer awareness, held its inaugural benefit concert on Wednesday at the Clarendon Ballroom. The event, which was emceed by Miss District of Columbia 2008 Kate Marie Grinold and included an appearance by Washington Redskin cheerleaders, featured musical performances by local rockers Memphis 59 and the Justin Trawick Group. Among the many attendees of the cause were local rockers Ted Garber, Adrian "Hardkor" Krygowski, and The Dreamscapes Project's Keith Center.

Opening act Memphis 59 showcased their up-tempo take on the "No Depression" sound, highlighting the tracks from their forthcoming album Ragged But Right. Combining rock, country, and a dollop of Twin Cities punk sensibility, these Arlington rockers warmed the crowd up with their earnest and often humorous takes on life, love, and heartbreak. Their pièce de résistance was an energetic cover of The Replacements' "Alex Chilton".

Headliner Justin Trawick took the stage with his band after a short break to build on the toe-tapping intro from Memphis 59. Showcasing the "urban folk rock" sound that incorporates hints of G. Love, Digital Underground, and the Afghan Whigs, Justin kept the crowd moving with his forthright yet danceable tunes. As if his usual versatility wasn't enough for this special event, he even managed to work a waltz into the evening. In addition to his usual band, which consists of bassist Jean Finstad, drummer Danny Schwartz, guitarist Josh Himmelsbach and saxophonist Ken Wenzel, Justin had a little musical assistance from Ted Garber and frequent collaborator Malik Starx. 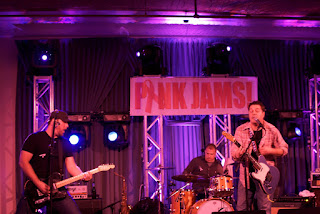 Memphis 59 getting their alt-rock on! 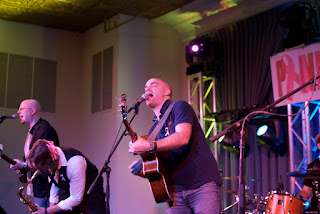