Posted by Brian G Flores on June 29, 2009
This post is appallingly overdue, but timeliness has never been one of my strong suits as a blogger. I had the pleasure of catching two shows at the Black Cat Backstage, the intimate little space behind the Red Room Bar. Monday two weeks ago found me at the Laura Gibson & Musée Mécanique show. MM, the opener, completely flummoxed me with their densely layered gypsy folk. The band combines the Wilsonesque harmonies of Grizzly Bear with the complex folk melodies of Beirut. And I was very pleasantly surprised when Micah Rabwin and Sean Ogilvie of MM returned to the stage as Laura Gibson's band.
Gibson is a delight in concert. Hers is a talent that hearkens to a gentler time and place, her lyrics introspective yet abstract. Alone, her sound is intimate and austere, and the dim lights above the stage frame her in darkness. She has a lovely voice, one that occasionally almost gets lost in the din. She sings almost reticently, as if she's afraid the heavens will come crashing down if she opens her mouth and really belts one out. Her minimalist stage presence is purposeful, every note of every song carefully crafted. The overall effect is to make you feel like you're not in a concert hall; rather, you feel as if a friend is singing to you, or a mother is soothing an anxious child. Micah and Sean flesh out her sound, while at the same time retaining a degree of intimacy with the crowd. I couldn't imagine watching her sing with a full 3 or 4 piece band; I feel like something would be lost in translation. And pardon the poor quality of the pictures. I seemingly didn't contact the right person at Hush Records for a photo pass, so I was relegated to my trusty point and shoot for the night.
After the set, Gibson and her bandmates came out to meet the audience. They were every bit as charming in person as they were onstage, gracious and thoughful. And I hope they took my suggestion to see Maya Lin's exhibit at the Corcoran the following day. 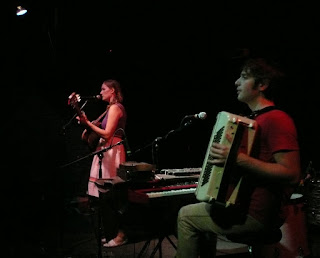 Wednesday found me returning to a surprisingly full house for Telekinesis, a one-man outfit fleshed out to a full touring band. The one man in question is Michael Benjamin Lerner, a wunderkind drummer from the Pacific Northwest who draws obvious comparisons to Death Cab's Ben Gibbard. Adding fuel to that fire is the fact that DCFC's Chris Walla produced Lerner's debut, Telekinesis! Opening for Lerner was An Horse, an energetic duo from Brisbane who reminded me of the Yeah Yeah Yeahs as interpreted by Viva Voce. They make an ungodly amount of sound for two people, not unlike classic Local H, and surprising considering both members of the band probably don't outweigh Local H's Joe Daniels. 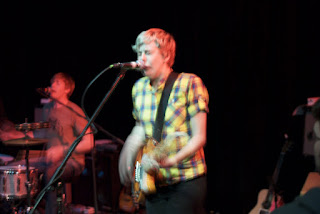 My concertgoing friend and I had a chuckle as we doubted most of the people in the audience knew the headliner was standing in their midst. I introduced myself to Michael at his merchandise table, and mentioned to him that I had a photo pass from a publicist at Merge Records. I told him I'd be the guy in front snapping photos, and I'd try to be as unobtrusive as possible. He chuckled and told me I could be as obtrusive as I wanted to be. He still seemed really awed by all the attention and the publicity, thankful that he had caught a little lightning in a bottle.
His set was concise but dynamic, including most of the songs from the album, a couple of tracks from the Coast of Carolina EP, and a cover of the Kinks' "House in the Country". Lerner was a kaleidoscopic dervish onstage, dispelling any skepticism I had that he could sing and drum as energetically live as he did on the album. 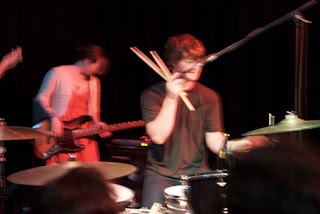 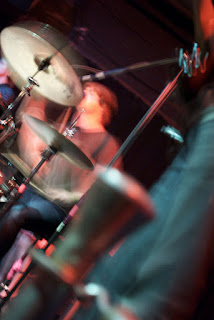 stacks said…
good post and a great venue to see a show. though i've never heard of laura gibson, the band def seems worth checking out. thanks ofr the info
6/30/2009 8:12 AM