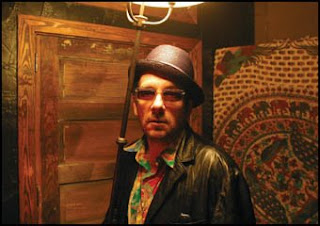 This is the second concert in a row where the crowd has been overwhelmingly middle-aged and older -- silver was the predominant hair color (if there was hair at all); people picked their way carefully down the Wolf Trap steps; there were some canes.  Well, whatever, time marches on, but some things are still the same.

Elvis Costello is still incredibly prolific, and is touring to promote his new album, Secrets, Profane & Sugarcane, which he touted good-humoredly during his performance. He played at least 7 songs from this new album, and they were all vintage Costello, with soaring vocals and exquisite lyrics.

Whereas he used to pack a whole novel into a 3 minute pop song, he is now dissecting moments and memories, losing some of the snarky cockiness of songs like “Blame it on Cain” and “Brilliant Mistake” (both of which he performed) and replacing it with wistful vignettes of people who have not gotten what they wanted. OK, so maybe he always wrote about the same things, only his protagonists, like the songwriter himself, now feel the weight of time upon their shoulders and feel regret instead of anger at the inability to change vanished moments.

Though he apologized for his croaky voice, he could still croon in that signature tone (once described as adenoidal—I tend to disagree, but as the man himself once said, “Writing about music is like dancing about architecture”), as exhibited by his performance of “Alison.” He engaged the audience in a little playful scatting during the last verse of that song, changing the poignancy of the lines to a celebration of everybody’s favorite Elvis Costello tune.

There were no drums in his back-up band of crack musicians (including a fiddler  and an accordionist), and only one very occasional back-up singer (country/bluegrass musician Jim Lauderdale), so that he provided both main and back-up vocals on songs like “Femme Fatale” and “Red Shoes.” His banter was funny, his band was loose, and even though the old folks on the lawn never got up to dance, we all left happily humming the tune of his closing song, “Peace Love and Understanding.”

**Special thanks to Alice Stephens for conributing this review**