A Tale of Two Concerts - My Gato Negro Weekend 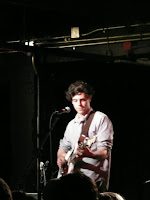 I had the pleasure of seeing not one, but two, shows at the Black Cat this past weekend. Saturday night saw me in attendance at the Noah & the Whale show. This Twickenham quartet is like a Wes Anderson movie set to music - witty, inscrutable, yet oddly charming. This shouldn't be surprising, as the lads are big fans of Wes Anderson, and draw the inspiration from director Noah Baumbach and his movie The Squid and the Whale (a film Anderson produced). They played many of the tracks off their debut album, Peaceful, the World Lays Me Down, offering particularly spirited renditions of their songs "Rocks and Daggers" and "5 Years Time". The latter song benefited from the backup vocals of opening artist Anni Rossi. The band also showcased several tracks from their forthcoming albums, decidedly darker and less folky tracks that seemingly derived their origin in the implosion of lead vocalist Charlie Fink's relationship. Although I was disappointed their encore wasn't longer, I couldn't help but chuckle by their song selection, a cover of the The Smiths' "Girlfriend in a Coma".

Sunday night was an abrupt about-face with the Cursive show. This Nebraska post-hardcore outfit aren't afraid to show their softer side, and featured a cello player at one point in their lineup, but they bring a thunderous edge to bear on their albums and in their live shows. Touring in support of their new album Mama, I'm Swollen, the band ruminate on the human condition, issues of morality and the existential angst of modern life. Frontman Tim Kasher meditates lyrically on whether civilization has improved our lot or simply altered our routine and sublimated our more primitive instincts for upward mobility and enlightenment. On the album's first single, "From the Hips", he sings, "Don't want to mumble what I'm trying to say / I want to scream if from my foaming mouth / Shoot out the lights and ride away". With "Caveman", a rollicking, honky tonk-inflected number, Kasher launches a broadside against American materialism and the socio-economic Darwinism of our capitalist ways. In the refrain he howls "The taller we become the more dollars we can grab from that highest branch / And then step on your back given the chance". This set displayed every facet of the considerable musical charms of the band and their new album, blending their post-punk cred and country-tinged roots with their proggier and more experimental impulses.

Photos courtesy of Brian Flores
Special thanks to Amanda Pitts of Cobra Camanda Publicity for arranging the photo pass to the Cursive show (shhhh, I didn't have one for the NATW show)