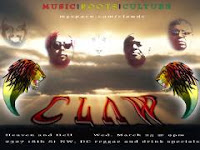 Then check out up & coming reggae band Claw at Club Heaven & Hell in Adams Morgan this Wednesday night at 9 p.m. I don't know much about this band, but I met Vince, one of the band members, on the bus on the way back from the Bloc Party/Longwave show. He gave me a CD containing two of their songs, Claw & Roots Rock Reggae, both of which are available for a listen on their MySpace page. The band's guitarist comes from a heavy metal background, which leads to a heavier, more rocksteady-style interpretations of their songs.