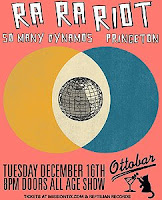 On the strength of Ra Ra Riot's stellar debut, The Rhumb Line, I braved the inclement weather to catch the last show of the band's North American tour at Baltimore's Ottobar. The Syracuse-based sextet played an all ages show with Princeton and So Many Dynamos as their opening acts.

From their opener, the elegiac and Joy Division-inflected Each Year, to uptempo numbers like Too Too Too Fast with its 5150-like synth, the band engaged the audience in their deeply personal tales of love, loss and redemption. Vocaslist Wes Miles' melodic tenor recalls a young Glenn Tillbrook (of Squeeze fame) or Beirut's Zach Condon. Guitarist Milo Bonacci, formerly of the Gym Class Heroes, and bassist Mathieu Santos form the hyperkinetic backbone of the band. New drummer Gabriel Duquette, replacing the late John Ryan Pike, keeps the rhythm in a band that veers chaotically across the stage like an old Beetle with a shaky CV joint and questionable alignment. The real story here, however, is the other string section, comprised of cellist Alexandra Lawn and violinist Rebecca Zeller. Their presence adds flesh and finish to the band's compositions in a manner that additional vocalists or guitars couldn't. As improbable as it sounds, the combination just works, and the net result was not only my pick for best album of the year (and one of the finest debuts I've ever heard), but the single best show of all the concerts I attended this year.