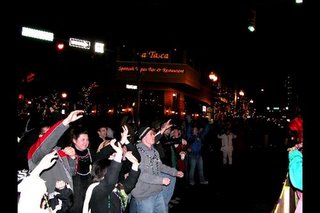 On Fat Tuesday night, February 28, 2006, at 8:00 pm, area Louisiana alumni will be hosting the "Krewe of Louisiana" in the 7th Annual Clarendon-Courthouse Mardi Gras neighborhood parade sponsored by the Clarendon Alliance.

The parade will march up Wilson Boulevard in the vibrant Clarendon area of Arlington, Virginia. The parade route starts on Barton Street, up to the Clarendon Metro Station (N. Highland Street), and back up the same route again. The Krewe will be in full force with floats, costumes, beads, music, a court, post-party and everything else to help celebrate the Clarendon Alliance Mardi Gras parade.

Admission to Clarendon Alliance Mardi Gras parade is FREE. The event is accessible via the Clarendon metro station on the Orange line. Free parking is available in the garage under the 3033 Wilson Blvd. office building, entrance located on N. Highland Street.